I Won a Necklace Set!

Earlier in the month I was notified by Peggy of Pear Tree Design that I was the winner of a beautiful necklace and earrings. I don't generally win anything, so you can imagine my excitement at this surprising news.

I just received my gift yesterday afternoon so I think it only fair that I show it off.

If you have a chance give Peggy a visit, her blog is always filled with a sense of humour and it's sure to make you smile. I have to send a big shout out to Peggy for the gift and for making me feel like an official Blogger!
Beautiful things happen when you LET YOUR CREATIVITY FLOW!
Posted by Sherry at 10:54 AM 4 comments

Email ThisBlogThis!Share to TwitterShare to FacebookShare to Pinterest
Labels: Necklace

Sometime ago I read on Karen's blog about her  No Sew Ottoman Slip Cover.  Although I don't own an ottoman, I do have a chest that my son had made when he was in preschool (yeah, like he really made it), actually I think the teacher or one of the assistants built it, but they probably let him bang on a nail or something... this is the chest

Yeah, I know, horrifying.  It didn't always look like this, but years ago when I had my sofa upholstered they told me that they could upholster the chest free of charge with the remaining remnants.  So, this is what you get when it's free.  I was ready to dump it, but it was made by my son over 15 yrs ago, and I'm a sentimental fool, plus it did have good storage space, something I can always use.

It was a eye sore so I kept it knocked about in the Guest Bedroom.

While browsing the blogs I came across Karen's blog about the no sew ottoman cover and a light bulb lit up.   I was ready to give this a shot but first I couldn't make it to the fabric store then I decided I didn't want to spend any money.  So I searched in my storage containers and I came across some kitchen curtains that I no longer had use for.  They look white in the photo but they're actually ivory.    Please forgive my make-shift window (smile)
The curtain is 5 pieces in total (1 valance, 2 side panels & 2 bottoms).
So, now I was ready to start...
I took the bottom curtain (which was the longest) and adjusted it on one side of the chest (the scalloped edges hung on the side of the chest)

Then I did the same for the other side, I was careful to adjust them to make sure they were even on both sides.

Satisfied, I started gluing the curtains while they were still on the chest.  Actually I only glued it partially, then I removed the curtains laid them flat on the floor and finished gluing. 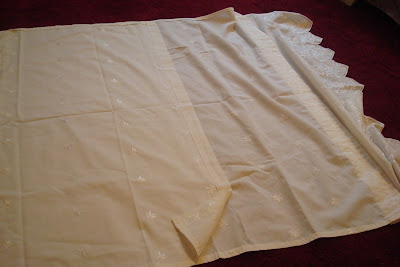 While that was drying (about 5 min) I took one of the side curtain panels and adjusted it on the back of the chest. 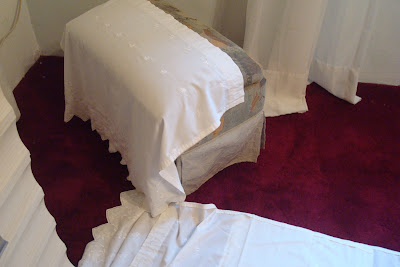 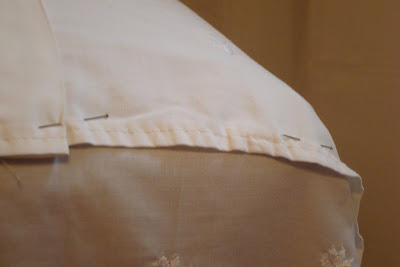 This is what the Front looks like - I just realized I didn't take any pictures of the back, but in the above picture you can figure out what the back looks like.
I then pulled the two sides together and pinned them in place 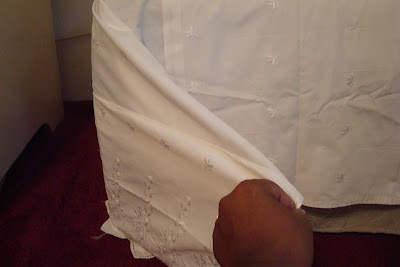 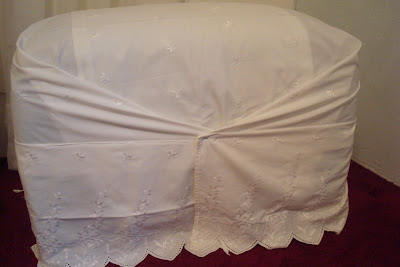 Well that's pretty much it.  If you want you can add a ribbon or nice button or something in the front.  I remembered I had two shoe clips that I no longer used - the buggers hurt my toes like crazy.   I did try using clip on earrings, but the grip isn't strong enough.
I liked the gold shoe clip, but it was a bit gawky....

I remembered I had chalk paint so I painted it - I only used one coat because I kinda wanted some of the gold to peek through.

Well, that would have been it, but I still have 2 pieces left so I decided to make a partial pillow cover (didn't have enough material for the back, so it could only be partial (smile)).
Using the other side panel, I folded it over about 6" from the top and glued the sides.  Now this is where I lied, you do have to sew, but it's really called tacking.  I found some elastic and tacked the ends down on both sides of the panel (this is to keep the pillow in place when you slide it in). 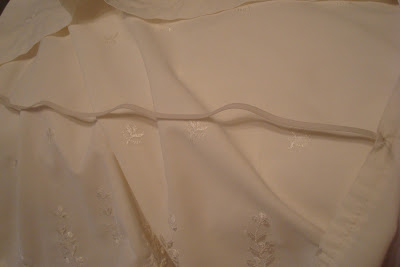 This is the chest with the pillow

I could have left it like this, but I didn't like that you could see the overlap (you don't have to worry about this if using darker or heavier fabric).  So I decided to add the valance on top.

There you have my No-Sew Cover for a toy chest.  If I hadn't told you, would you have known it was a toy chest????
BEFORE

This is what happens when you LET YOUR CREATIVITY FLOW!
Posted by Sherry at 10:25 AM 15 comments

Oh well, I'm back at working on candles for the holiday.  I was at the grocery store the other day when I came across candles like this...

I snatched 3 of them to work magic on, but so far I've only completed 2.  These are made up the same as my candle holders.  My first is called Blue Magic (okay, I admit I don't know why I give these things names, the names just pop in my head while painting...besides I guess it's better than saying "the blue candle" (smile))
Colors are blue (quite obvious), gold and spots of silver.

The second candle is Regal....purple, green with small streaks of silver.

And here they are together.... Regal and Blue Magic

I think they're much prettier than this...

Transformations are beautiful when you LET YOUR CREATIVITY FLOW!
Posted by Sherry at 11:12 AM 7 comments

Email ThisBlogThis!Share to TwitterShare to FacebookShare to Pinterest
Labels: Candles

I was featured on My Girlish Whims

I'm extremely excited because I found out Rebecca of My Girlish Whims
emailed to say she was featuring my candle holders on her blog.  It's always an honor when someone thinks enough of your project to show it off for you.  If you want to read more on the candle holders you can click here.
If you have a sec, go visit My Girlish Whims Rebecca has a lot of neat projects to show off or just read about and there's always something interesting to learn.  Rebecca also host linky parties on Wednesday's so if you got something you want to show off go party with Rebecca!

My friend and I went walking on the beach last week when I came across driftwood from a coconut tree.

Of course, being at sea for a while it had darkened
FRONT

My friend thought I was crazy, seeing as how we're surrounded by coconut trees, but it was something about this piece that caught my eye and I just had to have it.
To be honest, I didn't know what I wanted to do with it, but I knew I wanted to keep it as natural looking as possible.   I first became familiar with chalk paint when I read  Begin Again Furniture  blog where Allie talked about her experiment making her own chalk paint; she painted a beautiful chair.  I had also did some reading on Anne Sloan Chalk Paint and I liked the natural soft look it gave to furniture.  Of course, ASCP isn't sold here in the Bahamas so as usual I had to improvise.
There were several variations of making your own chalk paint but I found on No Minimalist Here blog where Sherry talked about using Calcium Carbonate, Whiting Powder or Plaster of Paris mixed with your paint.  I couldn't find the Calcium Carbonate or Whiting Powder but I did find some Plaster of Paris.  But before purchasing the Plaster of Paris I remembered I had some Lime at home, and because its suppose to be high in calcium and/or magnesium carbonate I decided to give it a try.  I figured, it's a piece of wood and not furniture, so what was there to lose?  I went with Sherry's formula 1/3 lime, 2/3 paint.
Here are the end results
I initially painted it red in spots before applying my chalk paint.  I wanted an aged look, so I decided to go with crackle - (can you see the red peeking through?)

I then started distressing

The final results (BACK)

Displayed on my Kitchen Counter

Not only did the chalk paint keep it natural looking, it allowed a beautiful flow of color formations.  The next time you go strolling on the beach LET YOUR CREATIVITY FLOW!
Posted by Sherry at 5:51 PM 5 comments 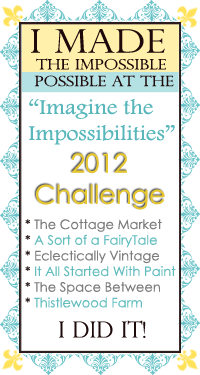